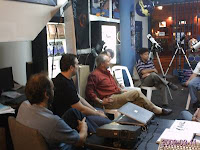 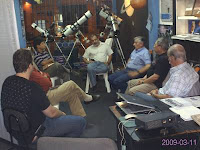 On the evening of March 11 as it was scheduled, the Members of UAPSG that live in Montevideo, Uruguay, held a meeting due to the fact that Milton Hourcade is visiting that country.
The event gathered together Professor Dr. Gonzalo Tancredi (Astronomer) and Prof. Dr. Claudio Martínez (Biologist) both of the Faculty of Sciences of the official University (Universidad de la República), and Mrss. Antonio Bachi, Rafael Forli, Germán Vázquez, Gustavo Quijano, Gonzalo Piano and Hourcade.
We want to give our deep thanks to Mr. Daniel Scarpa and Mr. Antonio Más, the owners of "Kappa-Crucis", a wonderful Astronomy store, who allowed us to use their place for our meeting.
After the technical presentations made by Dr. Tancredi and Dr. Martínez, Hourcade had a little lecture with images in Power Point dealing with the issue of "Things that can be seen at the Internet".
The Group adjourned at 10PM after an hour and a half, and maybe it meets again to consider some practical things related to the functioning of the UAPSG.
Posted by Milton at 11:27 AM