MILITARY MANIPULATION - USE OF THE BELIEF IN EXTRATERRESTRIALS 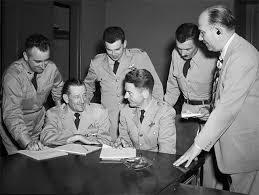 The UFO phenomenon developed spontaneously in the wake of science-fiction literature more than 50 years ago, when Kenneth Arnold observed in June 1947 the very first "flying saucers". The American military was then quickly able to profit from the fascination for extraterrestrials aroused in the public. Since then, it has continued to cultivate the belief in extraterrestrials and the fallacious impression that it is trying to cover up its supposed knowledge of the extraterrestrial origin of the UFOs. Some, composing the "lunatic fringe", even go so far as to think that the American military has concluded a pact with the extraterrestrials for the purpose of gaining technological knowledge in exchange for the authorisation for abducting humans! In reality it is the military itself which is the source of these rumours.

The military of the most powerful nations may have an interest in maintaining popular belief in extraterrestrials for the following reasons:
An extraterrestrial threat could enable the maintenance of peace on our planet by coercing people to come together. Some of former President Reagan’s speeches make one think that he was very fond of this idea , such as this extract from a speech made during the 42nd General Assembly of the UN, on 21st September 1987: "I occasionally think how quickly our differences world-wide would vanish if we were facing an alien threat from outside this world. And yet I ask, is not an alien force already among us?" (sic). Peace may not in all countries be considered to be a preoccupation of the military, but they may have received orders to this end.

An extraterrestrial threat might encourage an increase in military funding. Given the scope of the material means deployed by the American military for simulating the existence of extraterrestrials, one can only wonder if this motive has not been crucial since the fall of the Berlin Wall in 1989 and the end of the Cold War. Prior to this date, some UFO sightings had been attributed to the Soviet Union in order to maintain the illusion about its technological advance and thus confirm the permanent Soviet threat, again in order to justify extra funding requests.

A fake UFO incident enables a diversion to be made in the media when the latter are endangering an incumbent government, for example when a scandal breaks.

The belief in extraterrestrials allows prototypes that would be spotted far into a test range to be covered up. It also helps the use of reconnaissance aircraft to be camouflaged, such as the notorious U-2 (since 1955) or the most recent stealth aircraft produced by American technology, before the public discovers what they really are. By using suitable light effects to floodlight the underside of the plane so as to make it as bright as the sky, such as the "Lights of Yehudi" mentioned by Bill Sweetman in 1987, observers can be misled as to the shape of the aircraft they are looking at.
The belief in extraterrestrials also provides a good cover when using secret "exotic" weapons such as microwave weapons, laser beams, etc.

The belief in extraterrestrials again provides an excellent cover for tests relating to the mind control of an individual by disguising these tests as extraterrestrial abductions. This mind control can be psychological (suggestions under hypnosis…), chemical, puromycine [*] for causing amnesia regarding recent events…), or physiological (microwaves directed towards the brain. Secret trials of mind control carried out on prisoners without their knowledge were totally prohibited in the United States at the beginning of the 80s [Associated Press, June 1998]. Who, today, takes the place of prisoners? Outlawing these trials which the military nevertheless considers to be necessary is actually a mistake, since they then become wholly clandestine, without any possibility of civilian control.

Thanks to UFOs the military can carry out some psychological war tests in order to gauge the reaction of the population, of the police or of its own soldiers, whereby it can learn to manipulate and lead astray the enemy. UFOs can also be used to evaluate the reactions of radar or visual observers in charge of air surveillance over the national territory when confronted by an unknown threat.
The motives outlined above, which tend to show that it is the secret services that are pulling the strings must, of course, remain unsuspected by the world at large. To this end, the strategy that the military must follow is simple: they must systematically deny the phenomenon.

Those who have a spontaneous tendency not to believe in UFOs of extraterrestrial origin (intellectuals, sceptical rationalists, those who know nothing or little about the matter…) must have their beliefs strengthened, indeed be lead to the point of totally disinteresting themselves from the subject, which is made to appear ridiculous. In order to attain this objective, the military can count on the support of certain zealous sceptics, whether they are conscious or not of being manipulated. Such people are always ready to launch themselves against the irrational as if for them it were a matter of a holy war (!), even at the expense of distorting the facts and deceiving the public. In France and elsewhere, therefore, one witnesses a veritable barrage of attacks against ufology by the rationalists, who also have the respectable media on their side. One can wonder, though, who the anonymous producers, those who are financing anti-UFO broadcasts in which ufologists' interviews are cleverly edited, are working for, and where this considerable amount of money originates.

Those who tend to believe that the UFOs are of extraterrestrial origin and who are interested in the subject (adolescents, simple people, witnesses, some ufologists, those who know the dossier and the real strangeness of the matter…) must also be strengthened in their beliefs, even to the point of believing that the military is in cahoots with the extraterrestrials. The different American military commissions responsible for examining UFO sightings are always very gifted at supplying preposterous (e.g. policemen mistook the planet Venus for a UFO and followed it for one and a half hour in their car or manifestly false explanations (e.g. the "weather balloon" of Roswell - after the US Air Force had deliberately "made the mistake" of announcing that a flying saucer had crashed). Thus the American military makes sure that everybody is convinced it is hiding something: so extraterrestrials must exist! Certain passionate rationalists (the "debunkers"), hoping to find systematically an explanation for all the UFO sightings, sometimes play into the military's hands by suggesting equally ridiculous explanations. Some of these explanations are so absurd that they seem as it were, manipulated, or even paid for.

Thanks to this strategy, in the media the debate remains dualistic: flying saucers are a hoax and ufologists have a screw loose, or, the opposite, extraterrestrials really do exist and the government knows it. The truth which is hidden between these two extreme positions is kept away from the general public, and, while the rationalists and the ufologists do battle through the intermediary of the media and laugh about the theories of their adversaries in private, the military pursues its operations without hindrance in the very heart of our democracies and with public money.

The military is of course hoping to deter official and private researchers, but also the police, from investigating these UFO phenomena that it has staged. That's why for example, soon after the beginning of the Roswell affair in 1947, the US Air Force requested the FBI to investigate some UFO events which it had actually staged for their benefit. The FBI agents discovered that these "UFOs" were toilet seats and dustbin lids: they were disheartened, which was indeed one of the US Air Force’s objectives, where the analysis is different but complementary]. Later the FBI was again put off following a wasteful investigation into the fake document of MJ-12.

As ever with a view to keep aside the nosy intruders, the military sets traps for private researchers by setting up some alluring fake cases or by telling them that it wishes to inform them of some important UFO revelations, so as to later succeed in ridiculing and discrediting. The fake cases staged by the military can include absurd details which later will prove useful in ridiculing the researcher who accepted a particular detail in good faith. For instance, Prof. Jean-Pierre Petit, although a research director at CNRS (National Centre for Scientific Research), tells with an unexpected gullibility how the extraterrestrials from planet Ummo were very intrigued to find near the site of their first landing some human excrement covered with newspaper. This first discovery of an "historical" document would then have been shipped back to Ummo and preserved with much care. The Ummo affair seems in reality to have been staged by the KGB, which was using a group of Spanish university students as cover. The messages that Jean-Pierre Petit received were always authenticated by a piece of information normally known to him alone, which only a secret service would be able to obtain, whereas the pacifist and pro-communist content of the messages propagated in the West countries was clearly serving the interests of USSR.

The CIA also infiltrates groups of ufologists o make a note of those who are cleverer than the others and whom it would be good to discredit before they become dangerous. Feeding malicious gossip also helps to maintain a fratricidal ill-feeling very present in this circle.

Evidently the classic opposition of "governmental forces who know the real truth: that extraterrestrials exist" and "the general public and private researchers from whom the truth is being withheld" does not hold up. It is rather a matter of "a cell of the secret services of the military manipulating" and "the general public, private and governmental researchers, the media, the police, the general armed forces and the members of the government who are being manipulated".

Jacques Vallée points out, furthermore, the "connection which exists between the most staunch partisans of extraterrestrial contact and the American extreme Right, anti-Semitic and neonazi" which could be behind a breakaway group among several members of the American secret services. One can also envisage an infiltration of these services by a powerful sect, such as the Moonies or the Scientologists, whose great guru will soon arrive on Earth in a flying saucer to save humanity… Such infiltration attempts have already been uncovered [ie. the neofascist organisation of Lyndon La Rouche]. These ideas may be turned on their head by the rationalists in order to encourage a confusion in people’s mind between UFOs, sects and fascism, and thus to discredit ufological research, which again serves the goals of the military.

The CIA and FBI have admitted that they encourage belief in UFOs so as the better to hide their activities, but the two agencies have not expanded on the methods of this manipulation of the public and, indeed, have minimised its scale… The aim of the second part of this study will be to look for definite evidence of this huge manipulation orchestrated by the military. But allow us to insist on the fact that we are speaking here only of the largest military powers, as we are clearly invited to by "the exemplary attitude of the Belgian authorities, both civil and military, who have given proof of their remarkable objectivity and who were not afraid to work together with the ufologists" during the great UFO wave over Belgium from 1989 to 1993. Such an attitude of openness and co-operation is (and always has been) completely unthinkable in the United States, in France, or in Great Britain, where the UFO phenomenon first began.[**]

Note 1: [*]  Puromycine is an atibiotic. It will never serve to create amnesia.
I prefer to suggest a substance like PKMzeta that really causes
amnesia.

Note 2: [**] To say: "in Great Britain, where the UFO phenomenon first
began" is a big historical mistake, unless the author wants to
refer to the United States, mentioned at the beginning of his
frase.
Posted by Milton at 11:33 AM