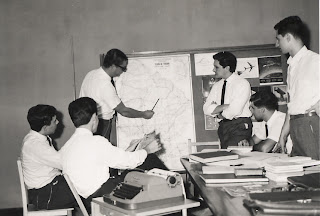 53 years ago, on April 29, 1958, a group of courageos young men met together to give shape to what for the following 50 years was known in Uruguay and the world around as C.I.O.V.I.

The Unidentified Flying Objects Investigation Center, a private and civilian institution that started from the scratch and acquired experience and expertise in the field investigation, the subsequent study and classification of the original UFO reports in Uruguay.

C.I.O.V.I. was pioneer in its activity and no one accumulated more experience, more study, more international contacts and dedicated more thought and reflection about the UFO subject in Uruguay than C.I.O.V.I. did.

When the UFO subject, for technological reasons, declined, and there were no longer UFO reports as it used to be, nor relevance of the subject within the society, the Directive Council of the Center decided to close its activities, after existing for 50 years.

Nevertheless, recently, there were some UFO reports, and still they were directed to C.I.O.V.I.

The Uruguayan members of UAPSG took responsibility for the study of those cases which were opportunely and accurately solved.

But the spirit that shaped the character of those who belonged to C.I.O.V.I. is still there, and there have been rumors of a possible reemerging of the Center, particularly for the lack of scientific criterion and expertise of the official commission dedicated to deal with UFO reports in Uruguay.