REACTION TO THE EXTRA-TERRESTRIAL - A paper by Pofessor Albert Harrison 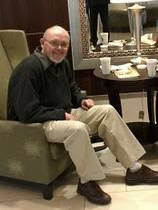 On January 26, 2009, I had the privilege to meet personally Dr. Albert Harrison, Professor Emeritus of Psychology at the University of California, Davis.

Professor Harrison was one of the participants in the meeting convened by the Royal Society on January 25-26 2010 under the title “The detection of exra-terrestrial life and the consequences for science and society”.

Now we are able to know the paper he presented in that meeting, that he titled: “Fear, pandemonium, equanimity and delight: human responses to extra-terrestrial life”

Here is the Abstract and the final part of it where he deals with two issues:
Program management strategies, and Are we prepared?

For those who want to see the paper in full here is the URL:

Policy development and advocacy, science education and information control are among the strategies proposed for guiding humanity through the search process and its aftermath. Over the years, SETI committees of the International Academy of Astronautics, along with other groups, have developed policies intended to prevent false alarms (by insisting on careful verification) and to release information to benefit all humankind. Logsdon & Anderson [40, p. 89] hoped to frame the initial announcement in such a way as ‘to minimize confusion, anxiety, fear, and perceptions of threat among the general population’. They sought precedents in strategies for announcing earthquakes, nuclear accidents and other disasters. They found that actual announcements (as in the case of the Chernobyl nuclear meltdown) tended to fall short from the ideal.

Other policy efforts have called for widespread consultation before sending a reply from Earth, and recent debate has focused on active SETI or METI (messaging extra-terrestrial intelligence). Discussions are useful for airing issues, but lack the force of law. New policy will not go far in the absence of endorsement by legislative groups and support from enforcement agencies. Apart from the problem of contamination from an exobiological specimen brought to Earth there is little in the way of identifiable policy that directly applies to non-SETI detection scenarios.

We might expect that a scientifically literate public that understands SETI and is resistant to rumours, pseudoscience and alternative history will be better prepared for the discovery than a poorly informed and gullible public. As Carol Oliver [18] points out, from its inception, SETI has maintained strong programmes of education and outreach. The SETI Institute takes a multi-pronged approach including a website, publications, teacher education materials and public appearances in person and in the media. NASA Ames Research Center is among the organizations that sponsors education and outreach efforts in the broader field of astrobiology. SETI@Home captured public interest and informed thousands of people who volunteered their home computers to help analyse mounds of raw data.

Oliver notes that the public learns about science from many different sources: the mass media, to be sure, but also from textbooks and college courses, art, literature, music, co-workers, family and friends and the Internet. Long ago communications experts shifted from targeting ‘the audience’ to targeting multiple audiences, each with its characteristic belief systems, motives, and level of attentiveness. Thus, different strategies or campaigns are needed to inform different audiences and this rests on sensitivity to demographic and cultural differences.

Almost 50 years ago the Committee on Science and Astronautics [2] assumed that the government would restrict the information made available to the public. Now, in our era of cell phones and e-mails it will be difficult to maintain secrecy. The SETI protocols describe the search as ‘open’ but require waiting for verification before announcing the discovery to the public. In an accidental test of this protocol, a news story of an unconfirmed detection ‘leaked’ to the New York Times before the verification procedure demonstrated that the call was not from extra-terrestrials [19]. Even if they choose candour and full disclosure governmental spokespersons will have difficulties convincing the public that they are being told the truth. The NIDS poll mentioned earlier found that 48 per cent of the respondents believed that following the discovery of ETI government would classify the information and not allow it to be released to the public and 23 per cent believed that government would classify all aspects and move to suppress civilian sources from obtaining or disseminating information about the discovery. Suspiciousness was higher among the respondents identified as ‘influential’ with 51 and 29 per cent endorsing one of the two cover-up options. Citizens’ lack of trust in their own government has reached crisis proportions and is one of the great challenges for political leaders today [41].

Times have changed dramatically since the 1961 US Congress was warned of adverse reactions to the discovery of ETL. The report that they received could not anticipate microwave searches scanning millions of channels at once, optical SETI, planet imaging, searches for chemical evidence of extrasolar biological or industrial activity or small smart spaceships. Who among the public in 1961 could conceive of home computers, the Internet, twitter or iPods? The discovery of ETI may be far less startling for generations that have been brought up with word processors, electronic calculators, avatars and cell phones as compared with earlier generations used to typewriters, slide rules, pay phones and rag dolls.

Almost all of the research conducted so far was based in North America, Europe, and the UK, so it is extremely difficult to gauge global response. Still, the patchwork findings that are currently available suggest that half of the people surveyed believe that ETI exists and a substantial proportion are convinced that alien spacecraft and astronauts have already visited Earth. Less abundant evidence suggests that people expect a millennial rather than catastrophic event, and feel prepared for the discovery. Society has been unfazed by batmen on the Moon, the canals of Mars, discoveries of quasars and pulsars, claims that a fossil arrived from Mars, and bogus announcements of SETI detections. Any discovery of ETI is likely to produce a mix of emotions including fear, pandemonium, equanimity and delight but in North America and Europe neither the retrieval of an exobiological specimen nor detection of a dial tone at a distance are likely to lead to widespread psychological disintegration and social collapse. Perhaps we should not worry too much about people who protect their belief systems by denying scientific findings (or recasting them as theory), and it seems unlikely that a ‘dial tone at a distance’ will shock people who are embroiled in civil war, caught up in genocide, or wracked by AIDS and starvation. People conditioned by years of participation in UFO clubs, science fiction and an endless parade of purported documentaries may find the discovery anti-climactic.

Of course, this expectation is based on searches that are currently under way. Typically there is a temporal gap or lag between a discovery or invention and cultural adaptation to it. In discussions of the human response to ETL the imbalance seems to be in the opposite direction. Discussions of cultural adaptations are outrunning present-day science.

Faster than light travel, quantum communication, interstellar Rosetta stones and other possible developments that may or may not become available do much to enliven discussions. Piled on one after another in endless combinations these ideas make it difficult to stay focused on what present day searches can yield. In truth, we do not know if and when ETL will be revealed, so we need to be open to many different possibilities. But planning for discoveries that are the most compatible with present day science—an exobiological specimen, a dial tone at a distance—should be the most useful place to start.